Why disruptive technologies do NOT need VCs.

That phrase indicates either a first-time entrepreneur with no experience with the toxicity of venture capital or the bureaucratic “startup exec” who goes from one VC funded firm to another, never making a profitable exit.

There are many startup species. Fewer than 1 percent are disruptive. Disruptive technologies fundamentally threaten a category; offering a minimum 10 times — more like 1,000 times — improvement over current methods.

Take a look at the DevOps sector, the sales platform automation, CRM area, and scores of other tech categories. You will notice the founders are almost always long gone. These firms are almost universally on their E, F, G financing round, every round vitiating the value of original stock options for employees and founders.

Venture capital does not think. It has an almost universal model in the B2B space. No matter what stage the company is in, the venture capital “partner” is all about massively bulking up sales, marketing, business development — anything to drive revenue now.

And almost universally, it fails.

Thus, the B, C, D, E financing rounds, the departure of the CEO, founders, and early top developers has become an accepted outcome model. Their stock becomes worthless and they are off to either become employees again or find a way to do a startup without VCs. 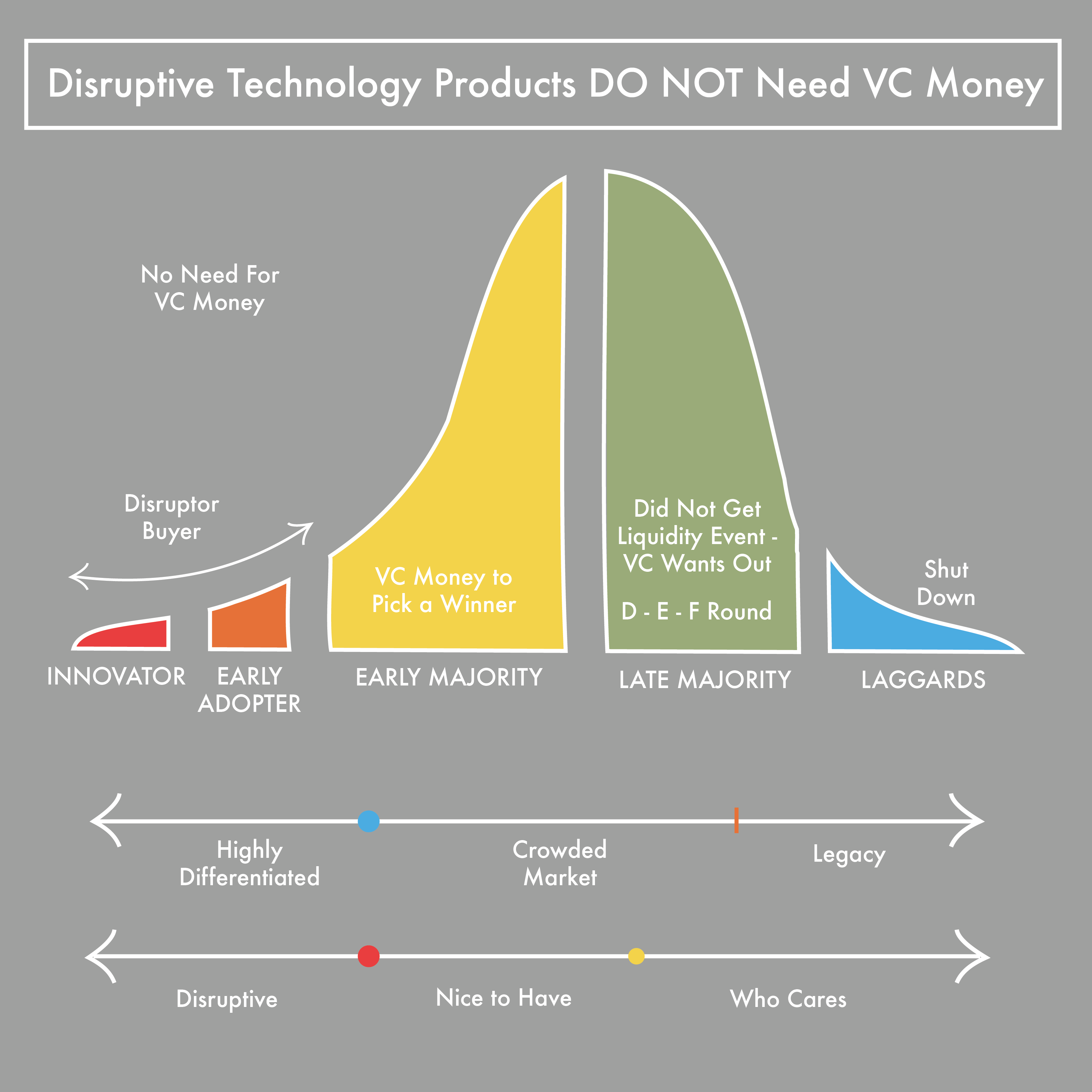 VCs do not let management put the investment on their balance sheet, prudently use it for slow, steady growth of both sales and customer service. Quite the opposite, the helpful VC will force management, under threat of termination, to build out that sales force now to become the early market leader. Even if there is no market yet.

This kind of activity is widely embraced in companies who are nice-to-haves. They are typically led by their second, third, or fourth CEO and VP of Sales and Marketing who go from one VC funded disaster to another. They are on that F, G round and have never made a nickel.

Disruptive technologies are quite a different matter.

First, they cannot use early infusions of sales and marketing steroids because they are selling to the early adopter, the innovator. And guess what? A traditional B2B sales force cannot find those buyers if they wore prisoner ankle bracelets.

Disruptive technologies do something quite unique — they disrupt. The smart founders of such companies can call on the market leader who they are about to disrupt or the market laggard who has no chance of ever catching up.

So, off to visit the laggard. This character has no chance of overtaking the leader. Its CEO sees life through a bleak prism because his or her board wants movement and there is nothing to generate overtaking action.

And here, dear reader, is the wide, green, sunny world for the disruptive CEO.

He or she partners with the laggards, those who have real pain that cannot be assuaged with current management fads, consultants, or technology. This is the person who is willing to write the early revenue, not equity, checks to the disruptor to get some traction against that blind, well-funded, market leading behemoth.

Both win big. The disruptive startup gets funding without equity dilution. It gets early customers. The laggard tech company finally gets traction. That CEO becomes a hero.

Most of all, the founders of the disruptive startup keep their equity, after all, they earned it.